Metrostav increased its pre-tax profit 172%, keeping a leader position on the Czech construction market for the ninth year in a row

Prague, May 16th, 2019 - Metrostav Group remained a leader of the Czech construction market for the ninth year in a row. The total operating income reached 1,368.5 mil. EUR which represents a 12.5 % year-over-year growth. Almost three fifths of the revenue created by the Metrostav Group companies led by Metrostav a.s., the parent company, was created on foreign markets, mainly in Slovakia, Germany, Poland and Scandinavia but also, for example, in UK, USA or Canada. Consolidated profit before tax 35.6 mil. EUR, a 172 % year-over-year increase.

The General meeting approved to pay its shareholders 6.6 mil. EUR. This represents a dividend of 0.84 EUR per share, the same as in 2017. 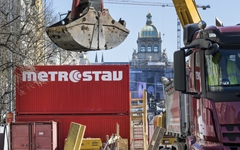